The first match LNZCC ever played was on 11th May 1952 vs Oxted CC at Oxted - LNZCC founders Trevor Campbell and Errol Holmes were also members of that club.  Known to be in the first LNZCC side were
1.       Roger Blunt – 9 tests New Zealand
2.       Errol Holmes – 5 tests England
3.       Tom Wells – Auckland, Cambridge University (Rugby Blue), Worcestershire; later Headmaster of Wanganui Collegiate
4.       Peter Wilson – Wellington, 3 first class matches
5.       Ian Botting, Otago, All Black winger to South Africa in 1949 and a very capable cricketer
6.       Leo Phillips (It appears Leo might have been the only club cricketer in the side.  He played for Sutton.)
7.       Paddy Sharpe; Dorset and Middlesex
8.       Bill Merritt;  Canterbury, Northamptonshire, 6 tests New Zealand
9.       Names of the other 3 players are shrouded in the mists of time
Other games in the first season in 1952 included:
Noteworthy events
In early 1952, the club was listed in the MCC Register of Clubs at Lords.  Sir Frederick Doidge, High Commissioner, gave a reception in Mayfair to celebrate registration and then Secretary of State for Commonwealth Relations, the Marquis of Salisbury toasted London New Zealand Cricket Club for the first time.  At that reception were five former captains of England, Lord Bernard Freyberg VC, Lord Tedder (Marshall of the Royal Air Force and Eisenhower’s deputy during WW2) and members of the club. 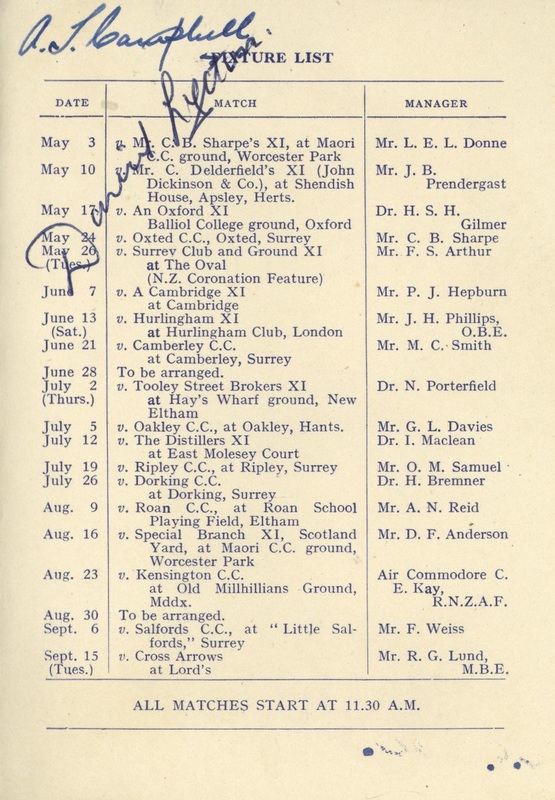